I Lost Myself in a Familiar Song...

What's the relationship between song familiarity and success on American Idol?

Its rhythm grows strong
It's so new and so strange
Like bells in the clouds, then again
The music must change!

Return with us now to those halcyon days of yore: a simpler time and place, full of simpler people watching simpler cheesy TV talent shows like Star Search, though at least folks back then knew what fancy words like "halcyon" and "yore" meant, whereas we have no clue whatsoever.  We just needed an intro for this week's editorial.

(*ahem*) Where were we?  Oh yeah: yore.  Back in Season Three of American Idol, during a challenging Elton John theme week, George Huff was in a quandary.  What song from Mr. Reginald Dwight's expansive catalog should he choose?  Bear in mind that John was and to some extent still remains a glam rock legend, known for his theatrical stage shows and amazing vocal range, while the low-key, low-range Huff was about as far from glam as is humanly imaginable.  The Louisianan dug deep into the pile of available songs and pulled out a gem: Take Me To The Pilot, a 1970 piano rocker that was familiar to Sir Elton's biggest fans but largely unknown to the general public.  Huff delivered it with a bouncy gospel spin, and his ingenuity was rewarded with a web approval rating of 87 – the best of his Idol tenure.

One yore, er, year later, Nadia Turner kicked off her AI campaign with a cover of The Power Of Love...except it wasn't Celine Dion's famous hit, or even Huey Lewis and The News's, but rather a song by Grammy-winning gospel singer Ashley Cleveland.  Aficianados of Christian rock might have recognized it, but the vast majority of viewers, of course, didn't.  No matter: Turner's high-energy rendition garnered an 86 rating and established her as an early front-runner in Season Four.  Alas, Turner went to the Well of Obscurity once too often.  For Year You Were Born Week, she chose When I Dream, an unremarkable and unmemorable Mac Davis number by way of Crystal Gayle.  Both reviewers and voters were underwhelmed: the former saddled her with a 32; the latter sent her home the next night.

If the sagas of Huff and Turner ring a bell, it may be because we highlighted them in an editorial this time last season, entitled "Hold On!"  In it, we mused about the conventional AI wisdom that obscure song choices were dangerous and to be avoided, and we proposed a new Idolmetrics study to prove or disprove that notion once and for all.  To that end, we requested the assistance of our more masochistic readers to help us classify all 729 songs in our database into one of five buckets – "High", "Medium-High", "Medium", "Medium-Low", and "Low" – based on how familiar the song was to the average AI viewer at the time of its first performance.

We went on to write that we'd be back with the results of the study "in about a month's time."  Hey, what's one unit of yore among friends?

Seven people took on the challenge of grading all 729 songs, and to them we extend a hearty "thanks" plus a promise that as soon as we get these results online, we'll come visit them at the sanitorium.  In all seriousness, we much appreciate their efforts, and we were encouraged to find a high degree of agreement among our volunteers.  With the exception of a few very old or very new songs (e.g. Someone To Watch Over Me and Falling Slowly), most fell relatively cleanly into one of the five buckets.

Of course, yore inexorably marches on.  The equivalent of a full season of Idol has gone by since we started this subproject, adding another 50-some songs to the database.  We graded those on our own, and we hope everyone will more or less agree with our assessments.  (You'll find the Familiarity level now displayed on each Song page.)

We elected for a multitude of reasons to exclude American Idol Coronation Songs from the study.  Among them: (a) By definition, they're exclusively of "Low" familiarity, (b) they're almost uniformly wretched, and (c) because they're first inflicted upon the world in a Finale episode, half the contestants who sing one perforce go home the next night.  Ignoring them keeps our dataset from becoming skewed, plus we just happen to enjoy pretending that they don't exist.

Finally, back in the halcyon day, it wasn't terribly uncommon for two contestants to perform the same non-coronation song in one episode.  (The practice has since been forbidden, hence the modern need for "hat picks" when there's a song-choice conflict.)  Thus, four songs have made a "double-dip debut", as it were: Ribbon In The Sky, Baby I Need Your Loving, To Love Somebody, and If You Don't Know Me By Now.  To avoid any complications as to which "debut" performance to use, particularly as the producers might have intentionally sequenced the night to have the stronger performance come second, we simply ignored this foursome.

To give you an idea of the breakdown, the table at right contains a random sampling of songs in each category.  Now, all together, everyone point at You Belong With Me in the "Low" row and scream, "Are you KIDDING??!"  The answer is no, we haven't been living under a pile of Ryan Seacrest's press releases for the past 12 months.  At the time it was first performed on American Idol, by Stevie Wright in the AI8 Semifinal Group One show, "Belong" was indeed an unfamiliar song to most of America.  Taylor Swift's Fearless album had been out only since November, and its first single was "Love Story".  YBWM was the third single, not released officially until two full months after Wright's cover had aired.  Once again, keep in mind that what counts is a song's general familiarity at the time it's initially sung on AI.

Now that we had the raw numbers, it was time to begin our study.  Our goal was to answer three burning questions.  One, was there a significant dropoff in approval ratings for obscure songs as opposed to popular ones?  Two, would there be a significant difference in elimination rates among the five categories?  And three, what the heck does "halcyon" mean, anyway? 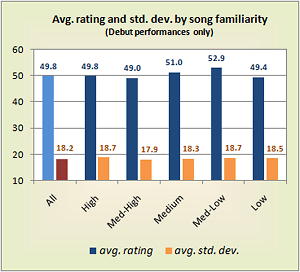 Let's start with approval ratings.  The chart at right shows the average rating and standard deviation of each song's first performance on American Idol.  (For baseline purposes, the leftmost column shows the historical averages of all performances through the first eight-plus seasons.)

Not much of a difference, is there?  The only one of the five categories that stands out is "Medium-Low", the ratings leader at 52.9.  That's three points above the historical average, which is outside the margin of error for this study but not far enough outside that we're ready to pronounce it a set-in-stone trend.  Standard deviations seem to run a hair above normal for debut performances, but again there's nothing in that chart that remotely suggests anything unusual is going on. 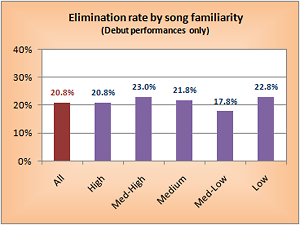 Moving on to elimination rates (see left), we find that where safety is concerned, "Medium-Low" songs again lead the pack by a solid margin.  However, that's to be expected given their higher average approval rating.  In fact, each of the five buckets is within the margin of error for its expected dismissal rate, given its approval rating.

The bottom line: When it comes to choosing familiar vs. obscure songs on American Idol, the conventional wisdom is simply wrong.  There is no significant correlation between a song's familiarity to the general public and either its average approval rating or its elimination percentage.  Obscure songs are neither safer nor more treacherous than well-known chestnuts, nor too do they trigger substantially higher differences of opinion among reviewers.  If anything, there is very weak evidence suggesting that the safest songs of all are those that are not terribly well-known, but not out-and-out mysteries either.

Last but not least: halcyon means "calm, peaceful, prosperous, and carefree."  Thanks, Dictionary.com.

It's (Still) The Same Old Song 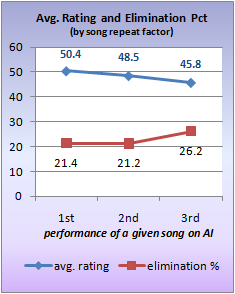 Mind you, there's one aspect of song familiarity that does make a difference: the number of times the song has previously been performed on the show.  Ignoring Winner's Songs, double-dip debuts, and same-contestant reprises, the nearby chart shows that there's a significant dropoff in approval ratings from debut performances to the first repeat of a song, and an even more substantial dropoff on the second repeat.  In other words: sing something fresh, dammit!

(Scientific duty compels us to disclose, much as it pains us, that if you absolutely must trot out a song that every Idol viewer is sick to death of, try to be the sixth person to sing it.  For no good reason, the average performance rating of a song sung five times previously is 57.5, and no contestant has ever been sent home or even hit the Bottom Three.  You did not hear that from us.)

At any rate, we hope that this study conclusively puts to rest one longstanding urban legend of American Idol.  There's no evidence to show that choosing an obscure song is dangerous in any way.  As always, the factors that truly matter are how good the material is and how well you sing it.  So if you're ever a contestant on the show, feel liberated to pick songs that are right for your voice and not necessarily ones that everyone has heard before.

...But is this song so different?
Am I doing it all again?
It may have been done before
But then music's an open door.