Ever wonder why the producers don't show the backstory of every semifinalist?

Hello, dear.  I'm Mildred, the Head Nurse here at Fox Sanitorium.  So kind of you to visit.  I know they'll be very happy to see you...that is, they would if we didn't have them pumped full of enough sedatives to kill a rhinoceros.  We got them from Paula.

All three were brought in last night.  We received a 911 call from the cleaning lady at the WhatNotToSing.com office.  She said she found them on the floor of the conference room, in convulsions and foaming at the mouth.  The youngest one had a piece of paper in her hand with some sort of colorful chart on it, but we're not sure what it means.  It's a real medical mystery.  The toxicology reports came back negative, and no one else in the building was sickened.  We even ruled out Swine Flu – well, sort of.  When we said the word "swine", one of them opened one eye and gasped, "Simon?".

Hmm?  Oh, yes, it would be great if you could help us diagnose what's ailing them!  That way we can give them the best possible treatment.  Here's all of the evidence that we've been able to piece together so far.

See Me, Feel Me, Touch Me, Heal Me

A few months ago, WNTS asked its readers for help in determining the exact level of pre-semifinals exposure of every contestant on American Idol.  They said it was part of a study on, um, an idle matrix.  What's that?  Idolmetrics?  Such a funny word!  But yes, I believe you're right.  Anyway, most Idol fans have long believed that the more early exposure a contestant is given, the more likely they are to survive deep into the competition.  Those poor What-Notters wanted to see if the conventional wisdom was true and, if so, exactly how much of a benefit this promotion was worth.

Unfortunately, gathering the data turned out to be a little more difficult than they anticipated.  No dear, Season One wasn't much of a problem at all.  Their researchers, particularly a Mr. Ian, did a phenomenal job digging up the original audition and Hollywood shows from 2002.  But, Season Two and parts of Season Three were very troublesome.  Some live-blog transcripts of their early shows can be still found on the Internet, but they didn't always jive for one reason or another.  Plus, by now the producers had added all sorts of additional footage to their Idol Rewind episodes, like LaToya London's audition.  Sadly, WNTS's people couldn't even agree on the original exposure levels of the likes of Ruben Studdard and Clay Aiken, much less many of the one-and-done semifinalists.

In the end, they collected reliable information on 192 of the 230 semifinalists to date.  They felt that this was enough to proceed.  They began by distributing the contestants into five groups, based on how much screen time he or she was given prior to the semifinals:

As it turned out, the first three groups were too small to work with, so the WNTS people combined them into a supergroup called "Late/None".  That gave them three comparable-sized sample sets: those contestants whose backstories had been promoted heavily, those who'd only had their audition featured, and those whose first exposure to America came very late, if at all.

We've learned that the actual study was performed in two parts.  The first was a standard Isolation Of Variables exercise, similar to what they'd done several months earlier for factors like sex, age, hometown region, and ethnicity.

It took our patients very little time to determine that, on the surface at least, the conventional wisdom was right.  Here's a graph we found taped to their conference room wall. 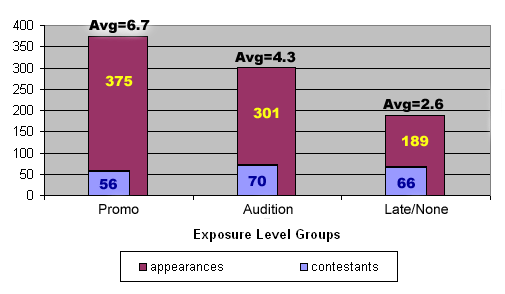 As you see, the 56 contestants who'd been given big promotional segments made a total of 375 appearances on the show, which works out to a mean of 6.7 episodes per singer.  If those nice Idol producers pimp you in January, and if the semifinals start in mid-February as usual, you're a huge favorite to last into at least April.  The 70 contestants who had audition-only exposure lasted 4.3 weeks on average, and the Late/None group lasted just 2.6 episodes.  Blink and you might miss them.

Next, the WNTS people looked at the approval ratings of each group.  After all, if the producers are promoting a contestant heavily, it's surely because he or she is going to be really terrific, right?  Well, it turns out that the pimped contestants' performances are the most liked...but something really strange turned up too...

Isn't that funny?  The Promo group has the highest average rating at 51.8, but the Last/None group is less than a point behind at 51.0.  The Audition group is miles behind both.  Yet, the 'unknown' contestants go home one-and-a-half times as fast as the Auditioners, and over two-and-a-half times that of the Promos!  The Idol producers and judges often assert in interviews that early exposure is grossly overrated, and that all that matters on their show is how well a contestant sings.  Well, I'm no math expert, but based on these results I'd have to say that those folks are, in medical terms, distended with fecal matter.

Finally, the WNTS team looked at how exposure, even after taking approval ratings into account, affects a person's survival chances in any given week.  They did this with their earlier Idolmetric studies too, and here's a recap of what they found.

Those percentages might not seem very large, but bear in mind that they're on a per-week basis.  Over the course of a 12- to 14-week competition, they add up tremendously.  So what effect does early exposure have on the survival rate?  Dear, perhaps you'd better sit down.

Good heavens, dear, are you okay?  You suddenly turned rather pale.  Deep breaths, slowly now: in-out-in-out.  Feeling better?  Yes, those results are staggering, aren't they?  Everyone always assumed that promoted candidates had an edge, but I doubt that many people expected it to be that cavernous.  Kelly Clarkson is the only winner to come out of the Late/None group, and it appears she'll have that distinction to herself for a very, very long time.

Which of those two charts was the one that made your friends so ill?  Well, actually, neither.  That didn't happen until the second part of the study.

Forever In My Heart

The WNTS people were left reeling by that 20.2% figure, but they held out hope that maybe it wasn't as bad as it looked.  Perhaps the effects of early promotion wore off over time.  It may be that the if the producers pimped you heavily, all it meant was that you were far more likely to make it from the semifinals to the finals, at which point contestants might begin to advance and fail on their own merits, not on their backstories.

Our doctors aren't quite sure what happened next.  All we have is this chart, which our hapless victims were apparently studying when they collapsed. 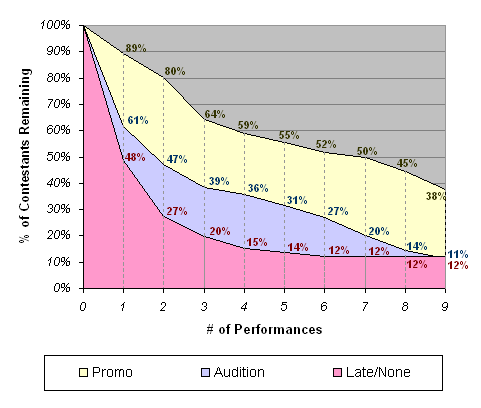 You think you know what it means?  Splendid!  Oh, they calculated what percentage of each group was still alive in the competition after each of the first nine rounds?  So that means after singing one time, 89% of the Promo group had advanced, compared to only 61% of the Audition ones, and less than half of the Late/Nones.  Yes, I get it now.

I think this means that just six Promoted contestants have ever gone out in the first round: AI3's Jonah Moananu, Briana Ramirez-Rial, Jesus Roman, and Noel Roman; and AI8's Kai Kalama and Nick Mitchell.  And, half of those were in the third season's infamous second semifinal group, the episode with the lowest average approval rating ever.

Let's see, after five rounds...heavens, am I reading this right?  Over half of the 'pimpees' were still alive, but only one in seven of the 'unknowns' were?!  In a Top 24 year, surviving five weeks would correspond to making the Top 10, which in turn means making the Summer Tour.  Semifinalists whose backstories were spotlighted are four times as likely to get that far.  Do you suppose the producers know about this?  I mean, I know they're really nice people and that they'd never play favorites or anything, but if they wanted to, they could really stack the deck.

From five weeks on, it seems if America decides they like a lesser-promoted contestant, they'll stick with them for awhile.  Nobody from that group has ever been eliminated between their seventh and tenth performances.  But then again, just eight of the original 66 Late/Nones made it to that point: Clarkson, Jasmine Trias, LaToya London, Bo Bice, Elliott Yamin, Jason Castro, and of course, Kris Allen and Allison Iraheta from this year.

It does appear that the magic of the Audition-only group does indeed fade away.  By the tenth week, which is roughtly the Top 5, they and the Late/Nones are virtually tied.  But the Promo group is still at 38%.  The benefits of a pimp piece are so strong, they give a contestant a head start that essentially lasts forever.  Almost two-fifths of pimped contestants survive to the multiple-song weeks.

Hmm?  Well, now that you mention it, yes – I imagine that percentage was far higher before this year, when 19E dished out a record 15 promotional segments to ensure they got the Finals they wanted.  And it would have been higher still had not Allen and Iraheta both gone on their surprising dark-horse runs and knocked out so many of the producers' favorites.  At least fifty percent, you say?  Please calm down, you're starting to hyperventilate again.  You almost sound like Kara.

Wait, what horrible thing did you just realize?  Ah.  Year in and year out, one of the most widely-requested changes to American Idol is for the producers to show the backstory of every semifinalist.  The Idolsphere practically gets on their hands and knees and begs for this, and it seems like such a normal, fair, and easy thing to do.  Yet for some strange reason the producers never act upon it.

And now you understand why.  It's because pimp pieces are the most devastating long-range weapons in the producers' arsenal of manipulation.  They give 19E up to a 50-50 shot of getting a preferred candidate deep into the competition.  They'll never relinquish control of that raw power.  It's why Bikini Girl, a mediocre piece of fluff who had no prayer of making the Top 36, got over 20 minutes of prime airtime this winter, enough for at least ten promotional segments.  And, as long as millions of gullible Idol viewers willingly take the bait hook, line, and sinker every year, nothing will ever change!   What's that?  "Two words: This Totally Sucks!"?  Oh no, now you really sound like Kara!!

Oh!  Doctor House, Doctor Wilson, please come quickly!  Another visitor just collapsed!  Have the orderlies add a bed to the WNTS ward, and I'll start an I.V. drip of sedatives, stat.  Good thing I have Paula on speed dial.

WhatNotToSing.com copyright © 2007-2021, The WNTS Team.  All rights reserved.  Use of this website implies that you accept our Terms Of Use and Privacy Policy.  American Idol is a registered trademark of 19 TV Ltd.  We are not affiliated in any way with American Idol, Fox Television, FremantleMedia North America, or any of their parent or subsidiary companies.