They say teenaged contestants have a big advantage on AI. They'd be mistaken.

Surprise endings have been all the rage in the entertainment business since at least Oedipus Rex, and probably for centuries before that.  In the 1950's, however, a mostly-unknown science fiction writer named Tom Godwin turned this oldest of plot devices on its head.  In his classic short story "The Cold Equations" (later adapted into a famous episode of The Twilight Zone), Godwin placed an innocent child in mortal danger on a lonely space vessel, with the hero forced to figure out a way to defy the most basic laws of physics in order to save her.  Readers and viewers had been conditioned for millenia to expect an ingenious surprise ending in stories of this type.  Which made "The Cold Equation"'s actual, brutally unsurprising ending all the more shocking.

We won't divulge any more about the plot in case you haven't read it, except to say that the delightful thought of shoving Ryan Seacrest out an airlock is...oh, hi Ryan!  You're here to host another episode of Smile & Wave Night, aren't you?  It's all part of our season-long series on Idolmetrics: the scientific study of success and survival on American Idol.  Last time out, we showed that a male contestant is 4% more likely to advance from week to week than a comparably-performing female contestant.  This time around, we turn our attention to the subject of age.  All else being equal, who do you suppose is more likely to advance on AI: a fresh-faced teenage contestant, a seasoned veteran nearing his thirties, or perhaps someone in between?

Oh come on, you say, the answer is obvious?  You'd better find your warmest winter parka, then.  You're about to find yourself on the receiving end of some very cold equations.

We'll start by hitting you with the most frightening, most intimidating, most utterly impenetrable chart that our Graphics Department has ever put together.  (*sniff!*) We're so proud of it!: 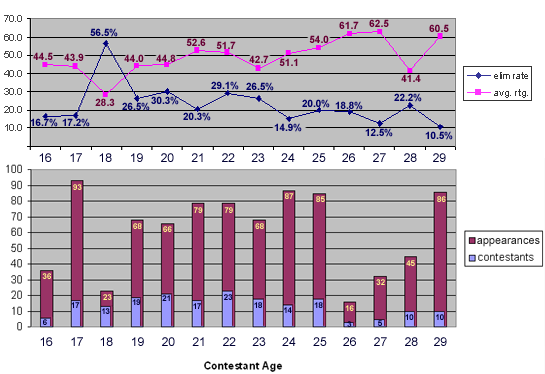 OK, now don't panic.  Take a deep breath.  All the above mess shows you is the distribution of contestants by age, from 16 to 29, in the show's history, along with the average approval rating and elimination rate for each.

For example, look only at the first column of data.  This tells you all you need to know about how 16-year-olds have fared.  The little blue bar at the very bottom shows that there have been just six of them to appear in the semifinals and beyond (AI3's Diana DeGarmo and John Stephens, AI5's Kevin Covais, Lisa Tucker and Will Makar, and AI7's Alaina Whitaker, by one day.)  The purple bar shows that those six appeared on a total of 36 episodes among them.  In the line chart above, we see they sang to an average approval rating of 44.5, and their elimination rate (6 dismissals in 36 opportunities) works out to 16.7%.  There now, it's not so scary, is it?

You'll find a few interesting statistical blips as you peruse the chart.  For example, 18-year-olds haven't exactly set the Idol stage on fire so far; their average rating is under 30 and they've been better than 50-50 shots to go home on any given night.  Only Camile Velasco managed to survive for longer than three episodes.  Also, although 26-year-olds have been eligible for AI from day one, just three have made it as far as the semifinals: Robbie Carrico, Chris Daughtry, and Joseph Murena.

Impenetrability aside, there's really not a whole lot that we can do with this chart.  There aren't nearly enough datapoints for each age to draw any meaningful conclusions, and besides, an age difference of one year is unlikely to be significant.  Had Jordin Sparks and David Archuleta each been born just two months later, for example, the average approval rating for 16-year-olds wouldn't look nearly so mundane.

Let's try organizing our data another way.  For each season, we'll divide the contestants into three equal-sized age ranges: young, middle-aged, and elderly.  Because the eligibility requirements have changed over the years, the precise cutoffs for these three groups depends on the season.  Here's what we ultimately came up with:

Of AI's 194 semifinalists thus far, 68 can be described (more or less) as teenagers.  Another 65 were in their early 20's, and 61 were mid-20's and beyond.  As you see, so far the producers' choices are skewed slightly towards the younger end of the scale, which may or may not mean anything.

More eye-opening, however, is the relative number of appearances that each age group has made.  Our youngest third have survived a total of 254 weeks, or an average of just 3.74 appearances apiece.  (Recall that an appearance corresponds to an episode, not a performance.)  The middle group has faced the voters 286 times, but the Old Guard lead the way with a whopping 323 appearances.  Surprised?  We suspect that most casual viewers of American Idol would have predicted just the opposite: cute, freckle-faced kiddies having routinely survived long after superior-singing older talent had been sent home.  In fact, the graybeards have on average lasted a week and a half longer.

Hmm, speaking of "superior-singing"...  Might our generation gap be explained, and then some, by the presumption that the older contestants have simply sung better?  Of course you realize that this calls for another graphic:

Beyond the fact that we're broadening our color palette, notice in this chart that our hypothesis is confirmed: By and large, the kids aren't alright.  The blue column bars are the key: with an average performance rating of 43.5, the teens of the first seven seasons have collectively performed well below par.  The Early 20's crew are a sizable cut above them at 47.8, though that's still quite a bit under the average of approximately 50.  Leading the way by a mile are the older singers, at 55.1.

Note too that as the blue bars get longer, the orange bars, representing the elimination rate, get shorter, just as one would hope.  (As we good folks at WNTS.com have been preaching forever: forget looks, personality, backstory or fanbase size.  The single best defense a contestant has against getting sent home is to sing well, period.)  Lastly, the brown and green bars show the average rating of an elimination performance vs. a safe performance, respectively, in each age group.

So that surprise ending you were expecting, the one where we'd conclude that teenage contestants have a substantial survival advantage over comparable older ones?  Sorry, but the equations emanating from our database bear a cold surprise: there's no surprise ending.

Through the first seven seasons, there is no statistically significant correlation between the age of an American Idol contestant and his or her likelihood to advance safely!

Age, it seems, means next to nothing on AI, no matter what the conventional wisdom says.  But bless the broken road we just traveled, because not only did we disprove one Idol urban legend, we believe also shot enormous holes in another.  And, it's one that's a whole lot more important in the grand scheme of things, too.

Last year, the producers of American Idol floated a trial balloon about potentially lowering the minimum audition age to 14.  (One media source quotes Simon Cowell as believing this to be inevitable.)  Their logic, near as we can tell, is that (a) the American public, and particularly the teens and tweens whose viewership (and disposable income) 19E covets, are demanding younger and younger contestants to keep the show viable, and/or (b) quality older contestants are in dangerously short supply.

If this theory were true, then surely we would have found some evidence supporting it during our travels today.  In fact, if anything, we discovered exactly the opposite.  Age makes virtually no difference in how long a contestant survives.  The voters (who presumably skew very young) don't seem to care one bit.  Moreover, there is an enormously strong correlation between age and approval ratings, which in turn correlate strongly with viewer satisfaction.  (If the producers are still scratching their heads as to why Season Seven's TV ratings were down sharply, perhaps they ought to have a gander at Season Six's approval ratings.)  Older, experienced, seasoned performers have absolutely throttled the Disney Channel Set thus far, and there is not one shred of evidence suggesting that this trend would be magically reversed if 14- and 15-year-olds were added to the lineup.

All of this would suggest that the folks at 19E need to turn around, pronto.  They're going the wrong way.  Instead of lowering the minimum age, they should be raising the maximum age.  American Idol may have started as a summer replacement series aimed at the teenybopper set, but seven years later one fact seems crystal clear: Even if the producers and judges haven't grown up yet, the viewers assuredly have.